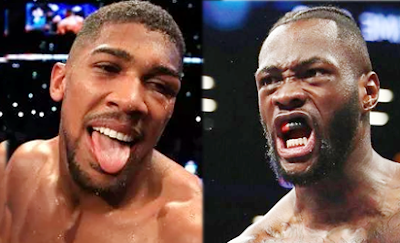 Deontay Wilder has accepted Anthony Joshua’s challenge and is ready for a summer showdown in the UK to decide who is the undisputed heavyweight champion of the world.

Joshua added the WBO heavyweight strap to his collection when he beat Joseph Parker at the Principality Stadium on Saturday night. Following the victory, the Watford bruiser quickly called out his American foe and Wilder’s manager, almost as rapidly, has answered the call.

“We are really glad that Anthony Joshua said for the first time “I will fight Deontay next…” and we believe he is a man of his word.

“We want to make it public that Deontay wants the fight, and we are prepared to come over, or meet here and get the deal done.

Deontay is ready to sign and come to the UK to fight this summer.” Finkell said he would be in contact with Joshua’s team at Matchroom this week to discuss plans to pencil a date, and venue, in the diary.

“I’ve got no issue fighting anyone,” the champion said. “If you look through my record from my 21 fights, there hasn’t been an issue with fighting anyone. There is no fear. There should be no hold-ups and [the Wilder] fight should be sooner rather than later,” said Joshua.

Wizkid Confirms Collaboration With YCEE, Set To Feature On His Album