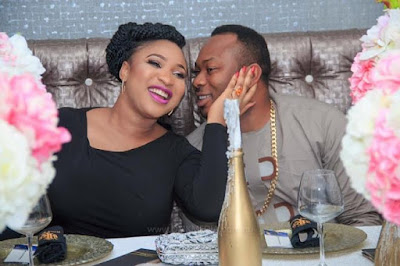 There seem to be no end in sight to the feud between Tonto Dikeh and Olakunle Churchill, her estranged husband. Both celebrities have decided to wash their dirty linens in the public glare.

Recall that social media has been awash with reports about a vendor calling out Churchill for allegedly owing them and absconding with their appliances from the home he once rented from them in Ghana.

Olakunle has however debunked the claims made by the vendor.

He wrote on Instagram:” With regards to the post on instablog9ja, about someone calling me out. I feel it’s baseless and a way to pull my personality down. We have more than 6 ongoing projects within that axis. Ghana is not my country as such my staff and expatriates are occupying four buildings and the manager’s name is Ralph Codjoe +233 20 644 4724 If at all anyone tried to reach me based on anything concerning Ghana because I relocated because of family over three years ago,” he revealed.

In addition, he warned his estranged wife, Tonto Dikeh to cease from associating herself with anything that has to do with him because she was trying to aid the vendor in locating him.

“AS FOR YOU MAMA KING, THOUGH WE HAVE MOVED ON AND YOU ARE NOT MY PA NEITHER MY SECRETARY HENCEFORTH DESIST FROM ANYTHING THAT CONCERNS ME.LASTLY, YOU SHOULD KNOW BY NOW WITH ALL YOU HAVE TRIED, THAT NO ONE CAN PULL A MAN DOWN ESPECIALLY ONE WITH THE GRACE OF GOD,” he also said.

Rihanna Gets Tattoo Dedicated To Drake

“Go and pay your bills and leave me out of your nonsense…Your son isn’t on Instagram so telling a sad untrue story is unnecessary…Quit telling people you can’t pay them because @efcc blocked your account. As a result of me reporting them to you,” she wrote.