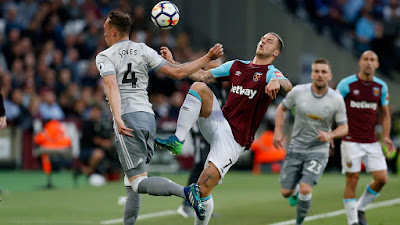 Manchester United secured second place in the Premier League with a 0-0 draw at West Ham on Thursday, but there was precious little else to please manager Jose Mourinho as the visitors again struggled for inspiration in attacking areas.

A third blank in their last five league games for United means local rivals Manchester City can seal another Premier League record by winning the league by at least 19 points if they win at Southampton on the last day of the season on Sunday.

In United’s first game since legendary former manager Alex Ferguson had to have emergency surgery on a brain hemorrhage, the visiting fans showed their support to the 76-year-old Scot with persist chants of “we all love Alex Ferguson”.

There was a more subdued atmosphere from the home fans at the end of another deeply frustrating campaign for the Hammers.

Two years ago to the day, West Ham waved goodbye to Upton Park in a thrilling 3-2 win over United on a night of high emotion in East London.

That victory also helped secure European football, but the move to the London Stadium, sold to supporters as West Ham’s chance to compete with the Premier League elite, has so far proved a false dawn.

United manager Jose Mourinho reacted to Friday’s meek 1-0 defeat at Brighton by making eight changes with Marcus Rashford and Anthony Martial relegated to the bench despite the continued absence of the injured Romelu Lukaku.

Mourinho reacts to Kepa refusal to be substituted

However, that failed to provoke an immediate response as West Ham posed the early threat.

Marko Arnautovic’s goals have kept David Moyes’s men up and the Austrian muscled his way into a good shooting position on six minutes but placed his shot too close to David de Gea.

Arnautovic then headed another good opening over before United awakened from their slumber.

Adrian has been restored in the West Ham goal for the past three games in place of England international Joe Hart and showed why with a hat-trick of fine saves.

Jesse Lingard was first to be denied with a fiercely struck long-range effort before Adrian showed quick reflexes to save from Alexis Sanchez and then get back on his feet to turn Shaw’s effort onto the post.

Lingard stung the palms of Adrian again early in the second period.

A lackluster United display was reflected in Pogba again failing to take control of the game.

The £89 million midfielders did have the visitors’ best chance when he headed wide just after the hour mark from Antonio Valencia’s pin-point cross.

Pogba then sent an audacious effort from the halfway line well over Adrian’s crossbar, to sum up, United’s lack of ideas in attacking areas.

However, the Frenchman did come to a lot closer with his final strike that curled just past the post from a narrow angle.

Pogba’s frustration then spilled over when he was lucky to escape with just a yellow card after grappling with West Ham captain Mark Noble as tempers flared in the latter stages.