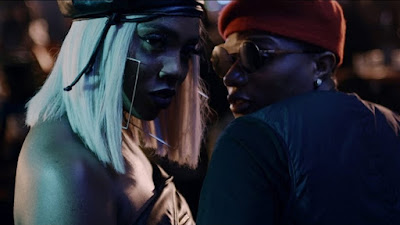 The Nigerian entertainment scene has been filled with speculations that celebrated pop stars, Wizkid and Tiwa Savage are dating. The ‘Malo’singer seems to have put her love troubles behind her after her marriage to Teebillz hit the rocks.

‘Assurance’ singer, Davido  took to his Twitter handle on Friday, May 11, 2018, to promote his new song ‘Assurance’ and he tweeted:”I give my baby lifetime insurance    #ASSURANCE out everywhere !!!.”

Amazingly, Wizkid immediately commented on the tweet saying “I am looking for a sister o!”.

Just when everyone thought the banter was over, Davido wrote:”Tiwa our sista ooo        STAR BOY !!”

This tweet subtly hints that Tiwa Savage and Wizkidare in a relationship.

Unconfirmed online reports reveal that Tiwa’s romance with Wizkid began, after she and her estranged hubby resolved to formally end their troubled marriage. Wizkid- Tiwa Savage alleged romantic relationship was allegedly sparked by the multiple collaborations they had.

Tiwa Savage and Wizkid‘s chemistry was evident when they shot the video for ‘Bad’, a video from Tiwa’s second album ‘Red’. It became more glaring when the video for Afro-pop song ‘Malo’ was released. The sensual vibes they both portrayed in the flick, made many believe something was going on between them.

In the same vein, music pundits will not forget in a hurry how Wizkid gave Tiwa Savage a cute kiss on her chin. It all happened at Gidifest on Easter Friday, March 30, 2018, where fun lovers came out to be entertained by the best of Nigerian musicians.

5 Nigeria artists that fell off after dumping their producers

Minister Sam – I Will Declare