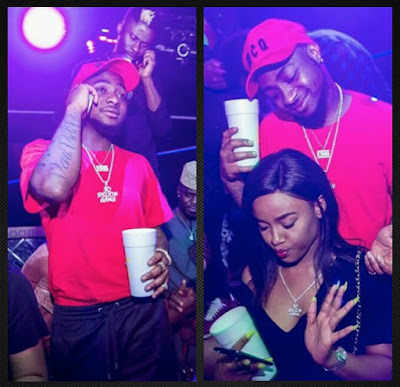 DMW boss, Davido, shuts down club Cubana in Lagos as he celebrates girlfriend’s birthday. Davido has shown he’s so much in love with his bae, Chioma Avril who many have continuously questioned the kind of ‘Juju’ she used to hold the superstar singer down.

Davido had released his latest hit song, ‘Assurance’. and in a gesture of love, he shut down Cubana club in Lagos as he was celebrating his girlfriend’s birthday.

Videos have gone viral on social media with the lovebirds having the time of their life as they party together in club Cubana. Somehow, Davido tried to keep the identity of his bae from the media for some time, but not anymore.

In one of the videos online, Davido said; “Some people are in love but are scared to show it.” In his case, he’s not scared to show it as he shares a kiss with his girlfriend after saying those words.