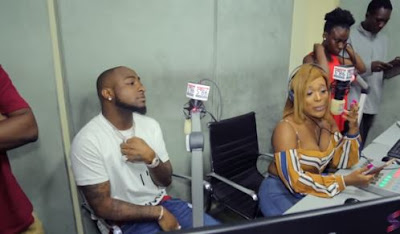 DMW boss, Davido has declared that he was the first person to make $1million from the popular ‘Pon Pon’ sound.
It is not in doubt that Davido and his DMW crew members have put out more records this year than many would have expected. The label which is made up of singers like Davido, Mayorkun, Ichaba, Yonda, Peruzzi and rapper, Dremo, have announced that their fans should expect a DMW group album in June this year
In an interview with presenter Moet of SoundCity FM, Davido and his other label mates spoke on several topics relating to their music as individuals and as a group.
Davido told the different stories of his first meeting with each member of the group and how each one got signed to the label. He later went on to announce that their group album would be released later in June 2018.
Speaking on the controversy surrounding the originator of the popular Afro Dance Music (ADM) sound which many calls ‘pon pon’ sound, Davido who is amongst the many Nigerian artistes claiming the rights to the creation of the sound, stated that he was the first to make $1 million from the sound.
Watch Video Below:

Danfo Driver calls out Tekno for Stealing Their Song ‘Jogodo’

Danfo Driver calls out Tekno for Stealing Their Song ‘Jogodo’