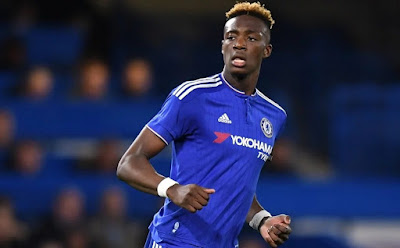 Chelsea striker Tammy Abraham will learn if he has been named to England World Cup roster before their next friendly against Nigeria on June 2 in London.

Despite playing two games for the Three Lions, Abraham is not yet cap-tied to the European nation and it is thought he is now behind in Gareth Southgate’s pecking order of strikers after he was omitted from the squad that faced the Netherlands and Italy in friendlies this month.

Southgate says he will name his squad for the 2018 World Cup in Russia before June 4 as it will help his players to be focused ahead of their World Cup commitments and avoid anxiety.

”I’d like to [name the squad before the next friendly] because you end up being able to run a performance camp rather than a selection camp. I think there’s a difference in the feel for everybody,” Southgate was quoted as saying by Eurosport.

“If you name 28 and they aren’t sure, but if you name 23 and five on standby – which Sven [Goran Eriksson] did well – then everyone knows where they sit. Those on standby have a chance but they come into the camp knowing that’s their role.

“If you have got 28 or 30 who think they might have a chance, then there’s a lot of uncertainty and anxiety within the games. For me, it’s much better to get the 23 secured and work from there.”.

Nigeria Football Federation supremo Amaju Pinnick held talks with Tammy Abraham over a change of allegiance in September 2017, only for the player to deny switching allegiance from England to Nigeria

Man Utd will not panic after Champions League defeat – Solskjaer