#BBNaija: I have no time for Collins drama – Miracle (VIDEO) 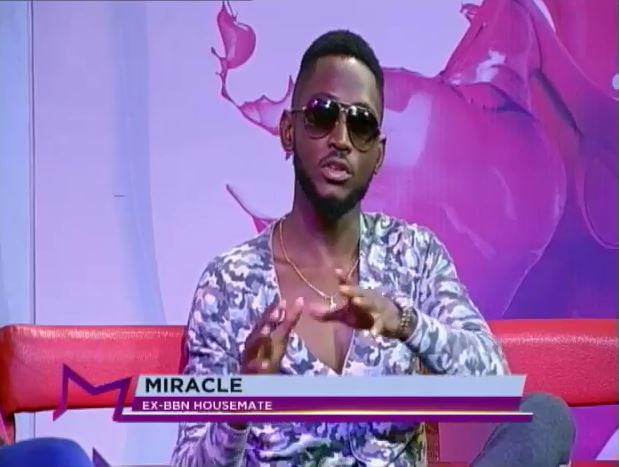 Miracle Ikechukwu, the winner of the Big Brother Naija, Season 3, who was on TVC’s entertainment splash show with Tobi, Alex, and Nina, said he has no time for the Collins drama as he’s currently discarding the negative vibes and focusing on the positives.

Ever since I got out of the house, I’ve heard Collins Collins Collins!! I haven’t gone back to check video clips of what’s going on. Right now, we have being busy, I’m only trying to focus on the positive vibe. So anything negative…., nah!!! He said.

“Like I always say even back in the house, the kind of relationship I and Nina had in the house, never changes for me, even after the house. So we are still cool.”

Collins who was Nina’s boyfriend for a year before she got into the Big Brother house, trended this week on social media after Nina dumped him in a live interview with Beat FM.

In an interview with Toolz, she revealed that she has not spoken with Collins since she came back to Nigeria.

Nina also said she was attracted naturally to Miracle.

“When I got into the house, miracle and I bonded very well. Everything happened naturally,” she said.

When Nina revealed that she had dated Collins for a year, Toolz asked if she had reached out to him.

“I don’t think I want to do that. I don’t want any negative vibes around me right me,” she replied.

The Entertainment Splash host, Honeypot, however, tried to get an update on her relationship with Collins,

Nina Says; “I’m cool with everyone and with Collins”

Watch the full video of the interview below: