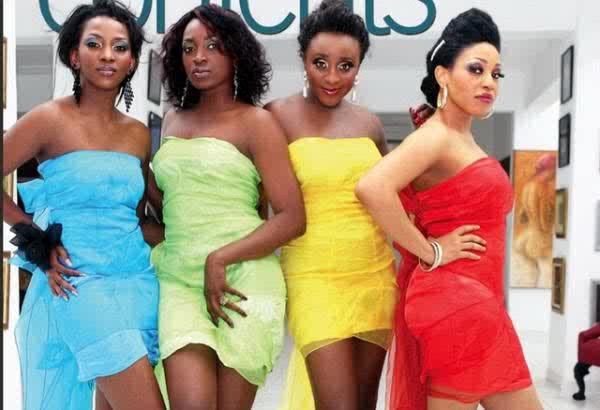 From many interviews with actresses in Nollywood, it is obvious sexual harassment is as normal as the next script. In fact, no interview with a Nollywood actress is complete without the cliché question, “Have you ever been sexually harassed in the industry?” Often time, the answer is always “yes”.

A number of actresses, particularly, the upcoming ones have on several occasions come out to blatantly state that they had experienced sexual harassment in one form or another. Though, an accusing finger has not been pointed at another.

1. Joke Silva recalled the experience of her intern, who she once took on the set of a Nollywood production.

“Some older actor goes to this girl and asks that they discuss, and she says ‘fine.’ But when he says where she should come for the discussion, she then comes to me and says ‘oh, I have been asked to come to this hotel to discuss this and that.’ And I say, “Why must it be in a hotel and why must you go alone?

Sadau accused Mr. Zango of booting her off his yet-to-be-shot movie, Duniya Makaranta, for refusing his alleged sexual advances. Mr. Zango publicly apologized to the actress.

During the press rounds for his new reality TV show “The Adventurers”, the actor recounted a shocking experience he had during his stay in a hotel, where a stranger made unwelcomed sexual advances towards him.

The actor withheld the name of the hotel and the country saying: “I don’t want the drama that comes with it.”

I was in a hotel and someone knocked on my door. I opened the door and the person was in a bathrobe, dropped the bathrobe and was completely naked in the hallway,” he narrated.

“I think I was scared that day. I shut my door and ran back to my room and called security. Before security could come, the person was gone. They didn’t want to pursue it and I felt disappointed. After a while, I let it go.

“This stupid guy, I remember my encounter with him about 9 years ago wen I was so passionate about acting”.

“I was happy when I met him as he promised that he would feature me in a movie that very day. I was so excited, I quickly called my people that I wouldn’t be coming home, “I dey go location”.

“Only for him to be telling me that shey I know I can’t sleep in a separate room when we get to the location o at Ikorodu. That we have to sleep together and he will have sex with me before he can feature me at all. He say na normal tin for all actresses o. I was so heartbroken”.

“You know what dis guy now did? As I told him I can’t do it, he just dropped me along the expressway in the middle of the busy road in Ketu. I cried till I arrived home. My mama just dey console me like a baby”.

Dolapo claims the actor invited her to a guest house, and when she said he was like a father to her, he said: “I know my children, and you are not one. If you want a role, then come.”

In 2014, He made it known while chatting with the journalist during a political award ceremony held in Lagos.

He listed the names of 5 people who he said they had taken the movie industry laws into their hands; Emma Ogugua, Sunny McDon, Ifeanyi Dikeh, Murphy Stephen and Okey Bakassi. “Nollywood has gotten so bad that you must either strip and grace their beds or join the gay or lesbian group to belong,” he said.

7. Actress Chiamaka Nwokeukwu, when questioned if producers and directors demand to sleep with upcoming actresses before they can get the opportunity to act?

Actresses” go through lots of challenges. Like, producers would want to go out with you before giving you a role. Sometimes, you might not even get it after they must have messed you up. But they often do that to girls that are desperate to act.

“Producers know when an actress desperately wants to act and they always take advantage of that. I didn’t go through such challenges because I wasn’t desperate. I started getting roles through auditions and any role I get, I try my best to do it well so it would speak for me. After some time, I stopped auditions, from the job I have done they call me for more jobs.”

“At a point, sex became a condition for getting movie roles so I just took a walk. There were times when I missed getting roles because I wouldn’t succumb to pressure so I left and did other things including studying at the London School of Arts. But the passion was so strong I knew I just had to return, I took time to look for professionals; people who would be interested in my talent and not be taking me to bed,” she recalled.

How I got heartbroken on Valentine’s Day - Tobi Bakre

9. Actress Steph Nora Okere has said that she was sexually harassed by a famous producer who put a knife to her neck.

Narrating what happened, the actress said: “A producer lured me to his house; told me to take off my clothes, put a knife to my head, what is worse than that?”

She also revealed that she had to take a break from acting after the incident. “After that happened, my family said: ‘that’s it, enough of acting,” she said.

10. Actress Mercy Johnson, when asked if she has been a victim of sexual harassment, the Kogi State-born said:

“Yes! Such had come my way, but if you sleep around for roles, will you also sleep around to make your fans love your work? You only choose what you want. It only takes God to be successful in this industry. “It’s a matter of choice if the ladies are approached with such. If you feel that your body is cheap and worth the script, then go ahead, but it is an individual thing. If any lady tells you in Nollywood it hasn’t happened to her, it is a cheap lie. Most people are scared of telling the truth, but the truth makes upcoming ones to watch their steps without making mistakes.”

Normalization of sexual harassment in Nollywood is simply a reflection of a society, which over years, has tolerated an array of improper conduct, especially, from the men.